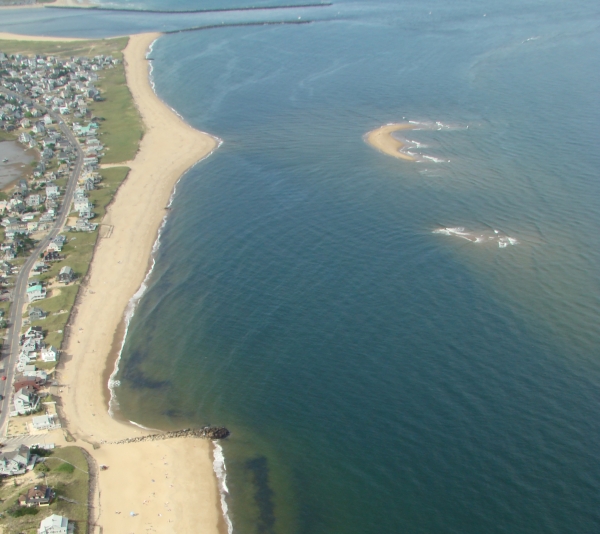 (Scroll down for Power Point Slides)

In 2008, 5 interrelated causes of beach erosion were identified at Plum Island. These causes interact with one another and are:

1)A near shore breach in the Merrimack River South Jetty (& North Jetty in Salisbury) that passes sand from the ocean facing shore into the river, narrowing the overall shore.

2)A River Jetty System that forces a once near shore sand supply offshore, away from the beaches, helping to create #3…

4)The center groin which, when uncovered, blocks sand migration to the north (and interacts with #3 to create an erosion hotspot)

Without question, the single most effective action to be taken to stave the erosion problem at both Salisbury & Plum Island beaches is to repair the landward end of both River Mouth Jetties where wave action has tumbled the granite stones into the river. To best prepare both shores for future sea level rise, a redesign of these structures also needs to be considered. To understand this position, let’s examine the function of the River Jetties.

When the Jetties were 1st constructed, shallow sandbars and shipping were primary concerns. Much like attaching a nozzle to a garden hose, the objective was to narrow the width of the river channel thereby increasing river current velocity. This increase in flow was to scour the river bed of sand keeping the channel deep for shipping purposes. However, the river bed never remained deep enough, as coastal processes kept refilling the channel with sand. Hence the Jetties were extended in length a number of times to prolong the duration of increased current velocity, driving that "nuisance sand" out to sea, and to keep sand from spilling into the channel from the shores of the barrier islands. The net effect of Jetty construction however, was that the river delta bar & its sand supply, which was once near shore & fused with area beaches, was relocated far off shore. As a side effect, the South Jetty began to act like a giant beach groin collecting sand along its south side widening & increasing the height of Plum Island. Ultimately, nature prevailed, the channel never remained shallow enough & a dredging program was implemented.

Though they were built as navigation structures, we see that the River Jetties actually serve a second function that directly impacts neighboring shores – gathering sand on the beach side & keeping it out of the river channel. So, relative to the barrier islands they also behave as what are known as Terminal Groins. As Terminal Groins, the Jetties bracket both shores, halting sand migration into the river, thereby keeping portions of the beaches near the river mouth stable. When low spots (or wave induced breaches) do form in the Jetties close to shore, nature’s cycles quickly resume and wave action efficiently passes sand from both the Plum Island & Salisbury beaches into the river. The result is a narrowing of the shoreline with the exposure of the rock groin structures on Plum Island. (These exposed groins can themselves create episodes of erosion on their down drift sides.) Today, the most significant low spot or breach in the (south) Jetty lies close to shore on Plum Island. The breach dictates a new high water mark that narrows the overall shore & encroaches upon existing homes. Sand can only build up (widening the shore) to the point of the Jetty breach. Any wider and wave action simply passes the sand through the breach into the river- ultimately expanding Plum Island Point.This isn't just a storm wave event, but a 24 hour a day sand migration that is part of a spit building process that nature seeks to continue. Plum Island Point is a continuously expanding Sand Spit that the Jetty (when it's intact) serves to interrupt.

Looking back into history, when the South Jetty was first constructed on Plum Island, this spit building process quickly stacked sand up behind the Jetty along the ocean facing shore increasing both the width & height of the barrier island - all the way back to the National Wildlife Refuge. The effect is much like a highway accident where cars driving north encounter an incident & then, as they collect, traffic backs up far to the south. This newly formed piece of real estate promptly filled with houses - where water once was. Now their existence is tied to the integrity of the South Jetty. When the Jetty fails, coastal processes drive sand back into the river, the shore narrows & houses are in jeopardy.

To compound matters further, with the river delta bar & its sand supply now far offshore, sand migration back to shore via wave action, is slow & protracted. Also, in the process of migrating back to shore, sandbars are created that alter the angle at which waves approach the beach. This has resulted in erosion hotspots at various points along the shore. In recent history, as Jetty Breaches have allowed sand to spill from the ocean shores into the river, this sand ultimately washed to the delta bar at the river entrance. Here, wave action drove some of that sand south, growing a long sand bar, offshore of Plum Island. While Wave action expanded the bar to the south, it concurrently also drove it towards shore. As a consequence of this process, the southern tip of this bar refracted incoming wave energy, creating erosion hotspots on the beach. These Hotspots mirrored & traveled with the southern tip of this southerly expanding sandbar. For example, we’ve observed an erosion hotspot near the area of Mad Martha’s (around the year 2000), migrate south to the center groin by 2004. With a narrower overall shore, Plum Island’s beach groins became uncovered. As this traveling erosion hotspot interacted with the previously covered center groin for example, we experienced extreme instances of beach erosion there. Currently this migrating bar is near the center, providing protection from offshore waves & passing sand to the Center whose shore is finally recovering. The southern tip of this sandbar now lies south of the center, refracting wave energy there. Hence the erosion hotspot moved further south again, to the area between the Center Groin & Harvard Way.

Ideally we should calculate an ideal beach width, redesign & shorten the Jetty System such that the delta bar relocates closer to shore, fuses with the barrier islands and establishes a more constant sand feed. It is important to note that some sand will still need to pass from the ocean beach of Plum Island, to Plum Island Point in the river, else that shore will severely erode as it has in the past following Jetty repair & an aggressive river dredging campaign.

Though Beach nourishment activities can buy homeowners time, they are at this juncture, temporary, very short term, & expensive solutions. The situation is analogous to filling a bucket of water to the rim, but the bucket has a hole in its side (the Jetty Breach). No matter how much water is added (& in the case of Plum Island & Salisbury beaches it is sand) one can never keep the bucket full.

In the effort to stave erosion, the cart here, has been placed before the horse. Until this failed infrastructure is altered, one can’t expect any type of sand, be it fine or coarse, dredged or driven ashore by waves naturally, to hang around for very long. To solve this problem one needs to fix the infrastructure first, be it through repair, or better yet, re-design, and then employ beach nourishment & conservation activities. Until then, we are simply pouring taxpayer dollars into the sea. Make no mistake, climate change & sea level rise are a reality & at some point many barrier islands will lose this battle. But right now it is this navigation structure that is impacting us to a greater degree. To best face climate change & sea level rise, it's important that we understand the coastal processes at Plum Island, design a proper river mouth that best stabilizes the nearby shores and requires a minimal amount of maintenance, be it dredging or otherwise.